The top flight of amateur soccer has wrapped up for the weekend, and it has served up a couple surprises to say the least. Division 1 continues to show its parity over the year, and here is a snapshot of what happened on Grey Cup Weekend.

-It started Friday night as top of the table Lakehill took down Cowichan FC by score of 1-0.
The only goal of the game came from Jon Shah of Lakehill.
Hardeep Gahunia earned the shutout for Lakehill.

-Another game for Gorge, meant another draw, and still staying undefeated, but dropping valuable points.
Merle Logan turf saw the match end at 3-3 as Nanaimo scored very late to earn the single point.
Gorge goals by Brennen McCleary and Zakaria Bougraine with 2.
Nanaimo had a goal by Caleb Nwameme and Andres Algarin with 2.

-From Ladysmith, Bays took out home towners Mid Isle by score of 5-1.
Bays goals were scored by Alex Redpath, Rhys Foster, Leo Nakabayashi, Ian Whibley, and a Mid isle own goal.
The single from Mid Isle was scored by Miguel Banting.

So after all the scores are entered, here are the up to date standings: 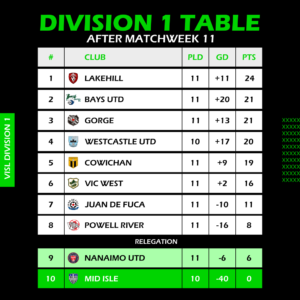 Lakehill open their lead up to their largest at any point this year.
Bays, Gorge, Westcastle, and Cowichan are close by and all within 2 points of eachother. (Keeping in mind that Westcastle have 1 game in hand vs Mid Isle)
Nanaimo and Mid Isle in the relegation zone, with Mid Isle looking for their first points of the year still.

Some goals over the weekend, and the leaderboard has a shift, but still has Cliff’s best buddy Blaze at the top of the heap.
Here is the breakdown,…….keeping in mind that Zakaria Bougraine from Gorge is also sitting at 8. 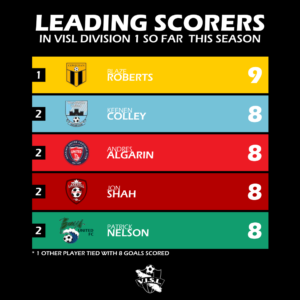 An amazing weekend that has many still confused, especially with all the draws that teams are playing to. No doubt, it is the highest amount that we have seen in many years. 3 separate teams with 5 draws, another team with 6…….unbelievable.
With the amount of points that teams have dropped because of all the draws, you just know they will come back to haunt one of them later on in the year.

Looking forward to next weekend already.

Posted in BC Soccer Island, BC Soccer Victoria, VISL.