We are very happy to get back on the field this weekend, the snow has taken its toll on the entire Island. Besides division 1 league games being postponed, the opening round of the Sir John Jackson Cup was also postponed this past weekend.
That has turned into adding many games for the upcoming weekend.  Mixing of play in and first round of Cup, as well as some division 1 league play.
Here is the play in round that should be taking place this weekend: 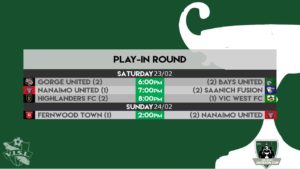 -Starts off Saturday with the struggling Div 2 Bays team up against the surprisingly underachieving Gorge Div 2 team. This has the makings of being a good game at Hampton as both teams have their fair share of quality.
-Up Island at NDSS, Nanaimo division 1 play on the school field for the first time in a while as they face a steady Saanich Fusion division 2 team.
Both teams are having quality years, just 1 division apart. We’ll see how much difference a division makes on the night.
-Thanks to Rugby Canada clearing the Westhills field, looks like that game will be played as divsion 2 Highlanders host Vic West of diversion 1.
This could be a big challenge for both teams. Vic West struggling with numbers and personnel, while the younger Highlanders group are playing well.
-The final match of the play in round has Fernwood division 1 hosting Nanaimo division 2 at Finlayson turf. Fernwood has had its struggles this year in the top flight, while the div 2 Nanaimo teams has been good at times.  A toss up.
****
Next up, also this weekend, the 1st round action where some teams are already matched up and are not awaiting winners from the play in round.
here is what it holds:

-Friday night will start off with division 1 Gorge hosting Prospect Lake of division 2 – at Hampton turf. The black n white have not had the best of years, but you know they will defend their title up against a hard working Prospect Lake side.
-The Saturday road-trip has Powell River Villa hosting Juan De Fuca Allflows in an all division 2 match-up. It has been several years since the Villa have hosted a JC game, the fans will be there to welcome a strong JDF club.
-Hopefully the snow has cleared and Comox are able to host Mid Isle in an all division 1 match. Comox has been hot in 2019, Mid Isle not so much – will be an excellent match to take in.
-The final match up of the Cup weekend has Vic West Vintage Roofing division 2 hosting Bays Utd liquor Plus of division 1. Vic West is near the bottom of division 2 and they will be in tough with he Bays team, should be an interesting game.
So you would think that all these Cup games would be enough, but that is not the case as division 1 league play is tight, and there are several games to make up.
This weekend will have a couple made up, or at least planned to as Westcastle & Cowichan will face eachother in a double header weekend to get caught up.
Here is what we have planned, with a chance of the Sunday game being moved to Wednesday:

-Not much needs to be said here as the top 2 teams are going at it, and it could have a big impact on the final standings and chase for the Garrison Cup.
Saturday will definitely be at Finlayson, while there are still Executive discussions being had as to the possibility of the Sunday game being played on Wednesday 27th in Sooke.
What we do know – the standings could possibly change drastically in favor of one of these teams, or other teams will catch up a bit more and remaining games will be even more crucial.
Here are the standings going into the weekend – a weekend that could have a team earn a valuable 6 points !!! 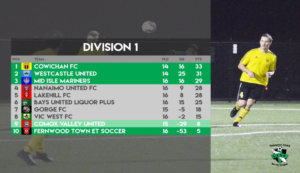 Plenty of soccer to watch on the weekend, and with the recent signing of Marcel de Jong, there will be plenty of personal motivation for individual players to feed on.
See you at the pitch !
Vince Greco
VISL Executive Director
Posted in BC Soccer Island, BC Soccer News.